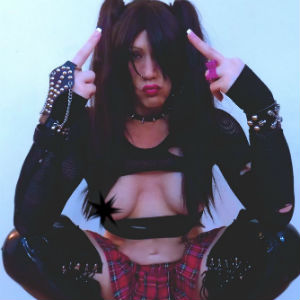 (Hollywood, CA) 2016 might be almost over, but TS performer, director, and producer Kimber Haven is still kicking ass and taking names, including scoring four nominations for Gross Misconduct Live’s Grossy Awards and hosting the XXX-Mas Party.

Haven has been a favorite of GML and has made several appearances this year and played their hugely popular Tranny Game. She’s up for four awards, including Favorite Guest, Most Interesting Guest, Most Popular Guest (per website page visits) and Best Tranny Game Moment.

“I love the Gross Misconduct guys – they’re so much fun and hilarious!” says Haven. “I’m honored to be up for so many nominations and can’t wait to do their show again!”

Another place you would’ve found Kimber was hosting and dancing at the XXX-Mas Party presented by Hot Wendy Productions. The event was Friday, December 16th from 9pm to 2am at Blue Grass Connections, at 942 Winchester Road in Lexington, KY. Cyndi Cynn, Kim Heart, Ms. Victoria, Wendy Williams, and Chanel also appeared and performed. Giveaways were sponsored by Adult Toy Overstock, for whom Haven is now official spokes model. More info can be found at LexingtonGirlParties.com.

To interview Kimber Haven for your site, publication or show or to book her for mainstream projects, contact Erika Icon of The Rub PR at erika@therubpr.com.