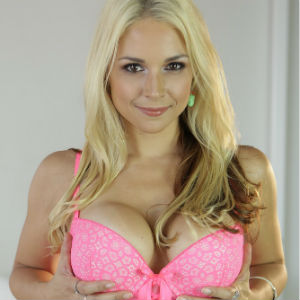 (Hollywood, CA) Blonde bombshell Sarah Vandella has a brand-new scene on Girlsway, and it’s her second appearance in their Mommy’s Girl series.

In Scene 1, Mom and Mommy, directed by Stills By Alan and produced by Bree Mills, Vandella and Jelena Jensen are married lesbians who adopt a child. Cassidy Klein plays their foster daughter. When Klein arrives, Vandella and Jensen tell Klein about her chores of keeping her room clean, doing dishes, taking out the garbage, and being a good girl. Jensen and Vandella have very different parenting skills – Vandella tells her to not be inappropriate, but Jensen has Klein doing her chores wearing only underwear. When Vandella decides Klein should be returned to the orphanage, Jensen comes up with a solution for Mom and Mommy to share Jelena.

“I love working with Girlsway and was glad they cast me as the Bad Mom – it was so much fun playing that role, but it was also hard because both Jelena and Cassidy are such sweethearts,” says Vandella. “I love feature films and acting and was very pleased that both Alan and Bree were impressed with my acting chops. If you’re a Girlsway member, please give the scene a thumbs-up, so you will see me in more of their productions.”

Also check out Fleshbot’s coverage of the scene.